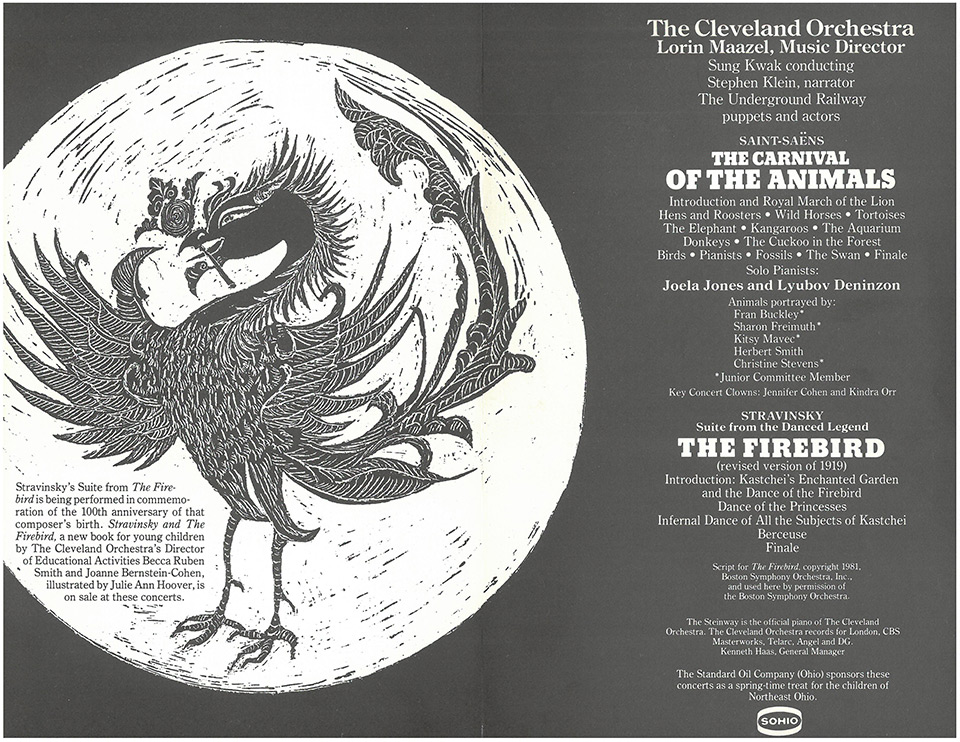 Musical outreach and enrichment programs that focus on young people across Northeast Ohio have long been a priority for The Cleveland Orchestra, with the ensemble’s first “Children’s Concerts” taking place in 1921, only three years after the Orchestra was founded by Adella Prentiss Hughes.  In the 1950s, as the Orchestra began to establish a worldwide reputation, Supervisor of Music Education Lillian Baldwin launched “The Cleveland Plan” — a music education initiative designed to expand the lives and cultural experiences of area children by exposing them to Orchestra performances.  Although the inaugural Key Concert wasn’t presented by the Orchestra until November 1970, the series was preceded by several “family concerts” that were performed in the summers of 1969 and 1970 at Blossom Music Center — providing a different perspective than the one offered by education concerts hosted at Severance Hall throughout the school year.  During the 2019-20 season, The Cleveland Orchestra celebrates the 50th anniversary of its Key Concerts, which served as a precursor to the Family Concerts today’s audiences know and cherish.

A distinct group of concerts at Blossom was created as a way to embrace families and provide the community with opportunities to experience extraordinary music performances.  In the summer of 1970, only months before the Orchestra’s first Key Concert at Severance Hall, Blossom hosted a Family Matinee with The Cleveland Orchestra intended as “a special program designed for youngsters and parents.”  Conducted by Michael Charry, the concert opened with Aaron Copland’s Fanfare for the Common Man — a reminder to young people that everyone, regardless of his or her background, possesses the will to be great.  Other selections included the overture from Mozart’s opera Le nozze di Figaro, selections from Tchaikovsky’s The Nutcracker and, appropriate for the day after the Fourth of July, an orchestral version of John Phillip Sousa’s Semper Fidelis.

Additional family-themed events across the summer of 1970 featured Cleveland-based youth chorus the Singing Angels, the New York City Ballet, selections from Berlioz’s Symphonie Fantastique, and Prokofiev’s Peter and the Wolf.  Not long after Mr. Charry returned to the podium at Blossom, one writer suggested that he had become “a familiar figure to the tens of thousands of area children who have attended the educational concerts at Severance Hall in past seasons” — establishing a clear and resounding connection between the Orchestra’s educational initiatives and its wish to inspire whole families through the power and passion of music.

Perhaps most responsible for the  founding of Key Concerts, however, was the Junior Women’s Committee of The Cleveland Orchestra — a group seeking to expand the educational, cultural, and creative impact of music on the lives of young people.  In addition to tapping Mr. Charry to lead the program forward, the Junior Women’s Committee scheduled a pair of concerts to be performed for children “between the ages of four and third grade” and informed the Little Orchestra Society in New York that these children’s concerts would “be held in addition to the regular 1970-71 orchestra season.”  The Junior Women’s Committee also discussed ways to make young people more familiar with the musical instruments being played at Severance Hall, and possible narrators for the program.  (One suggestion was popular TV host Fred Rogers.)

Shortly after the Orchestra returned from a tour of East Asia in the spring of 1970, renowned music director George Szell, who had led the ensemble for 24 years, died.  Still, the Orchestra pressed ahead with its education initiatives.  Edith Roebuck, who served as the director of the Cleveland Music School Settlement’s pre-school demonstrations and a member of the Junior Women’s Committee, suggested re-naming the Orchestra’s current Kinder Konzerts for children.  Ultimately, the committee chose “Key Concerts” because the performances were designed to open the doors of music to young people.  And, as the committee’s gift to the community, it elected to sponsor the first Key Concert presentation.  The new Key series was created to offer an original type of children’s concert to Northeast Ohio, which included a narrator to inform and engage young attendees, shorter musical selections, and the encouragement of audience participation through singing and clapping.  Furthermore, the experience was expanded to feature members of the Orchestra playing and showcasing their instruments for children as they entered Severance Hall.

Although a season schedule was announced, the response to the inaugural Key Concert on November 7, 1970, was so overwhelming that an encore performance was held only a week later — selling out as quickly as the first.  An additional Key presentation was also added to the Orchestra’s spring calendar.  Among the music choices for the first few Key Concerts was a suite from Ravel’s Mother Goose, Saint-Saëns’s Carnival of the Animals, and selections from Tchaikovsky’s The Nutcracker.  For the concerts hosted in October 1971, actor Peter Ostrum, 13, who played Charlie in the film Willy Wonka and the Chocolate Factory, was hired as narrator.

During the spring of 1972, there was enough public interest in the Orchestra’s Key Concerts that an extra performance was added to the standard back-to-back weekend series.  According to a letter from Mrs. Harry Carlson, chairwoman of the Key Concert Committee, the presentations had demonstrated a high level of success during their “pilot” period and should become a permanent fixture on the Orchestra’s calendar.  “We feel this concert series is an exciting, worthwhile project meeting a special community need and providing an excellent introduction to ‘formidable’ Severance Hall and music,” she wrote.  In addition, she noted that future music director Lorin Maazel, who would conduct some of the Key Concerts in October 1975, called the series “the best he had seen anywhere in the world.”

Across the next decade, Key Concerts remained a priority for the Junior Women’s Committee.  They also began to adopt specific names designed to reflect each concert’s program.  In March 1982, a concert entitled “Animal Tales” contained only two pieces, Saint-Saëns’s Carnival of the Animals and a suite from Stravinsky’s The Firebird.  Another example, from a November 1984 concert called “All Aboard the Music Express,” featured music related to movement — excerpts from Rossini’s William Tell Overture, Copland’s “Hoe-Down,” and John Williams’s theme from the film Superman.

Although the Key Concerts continued to include relatable standards, such as John Phillip Sousa’s El Capitán, Prokofiev’s Peter and the Wolf, and selections from Tchaikovsky’s The Nutcracker, the programming and subject matter began to expand.  In November 1991, a production called “The Magic of Mozart” featured music from various stages of the great composer’s career — including pieces written when Mozart wasn’t much older than many of the audience members attending Key Concerts.

Samuel Nemeth is a research fellow in the Archives of The Cleveland Orchestra for the 2019–20 season. He is in the second year of pursuing his Ph.D. in Historical Musicology at Case Western Reserve University.