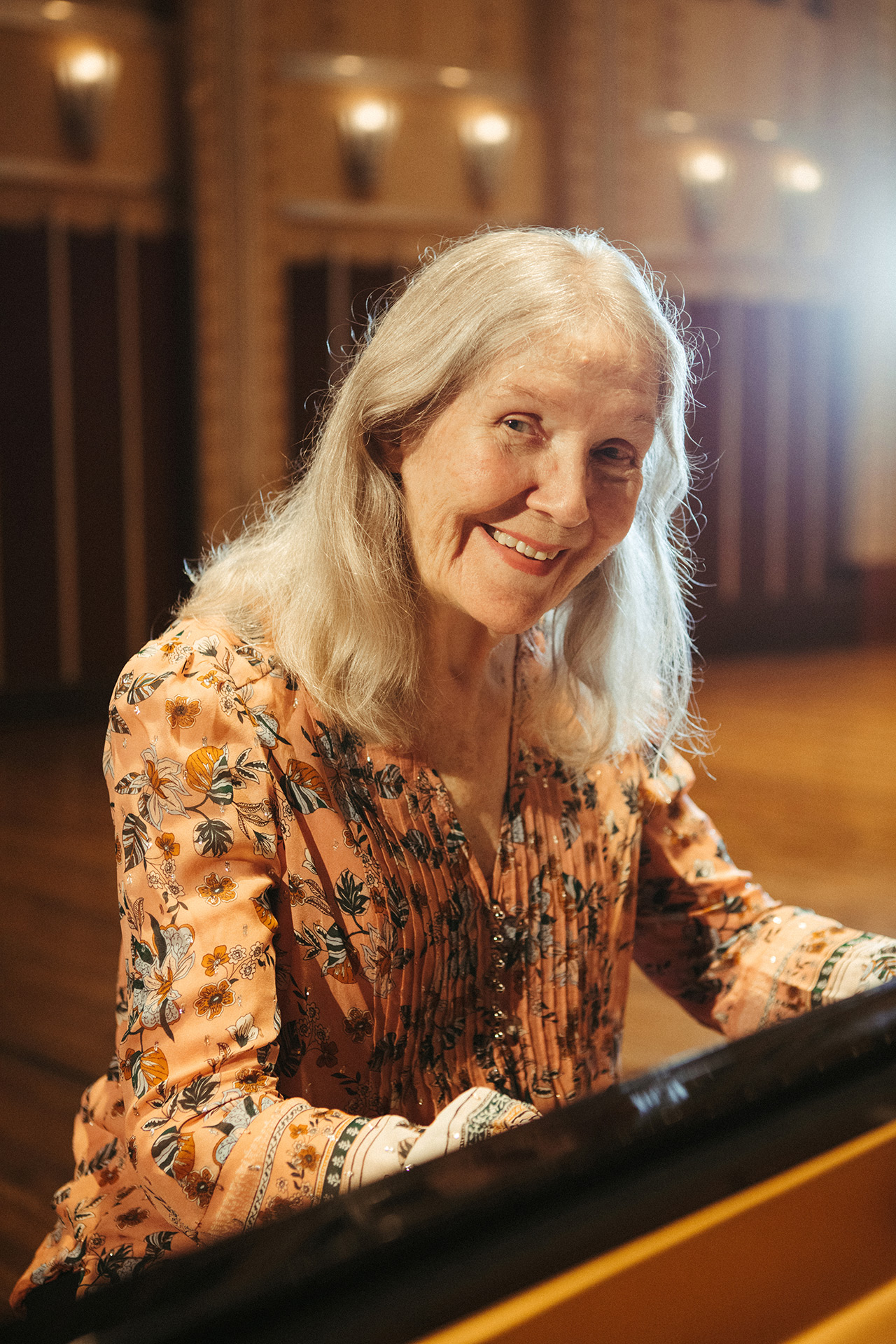 Award to be presented the evening of Thursday, October 14, 2021

Watch a special video about Jones and listen to a playlist of her most memorable performances at clevelandorchestra.com/joela

CLEVELAND – On Thursday, October 14, 2021, The Cleveland Orchestra’s principal keyboard, Joela Jones, will be presented with the Orchestra’s twenty-fifth Distinguished Service Award. Established in 1996 by the Orchestra’s Board of Trustees, the award recognizes ongoing and exceptional commitment and service to the Orchestra. Jones will receive the award during the Orchestra’s concert on October 14, which features her in a performance of Prokofiev’s Symphony No. 5.

Joela Jones’s singular career with The Cleveland Orchestra — across 54 seasons, more than 250 concerto performances, and thousands of unforgettable concerts — stands out as extraordinary. But her contributions go well beyond the countless notes played on stage. These were decades filled with Monday night rehearsals, accompanying the remarkable volunteers of the Cleveland Orchestra Chorus, afternoons or mornings in coaching sessions interacting with conductors and guest vocalists, countless chamber music rehearsals, and many Orchestra committee meetings, working tirelessly for the sake of her fellow musicians and the ensemble.

When the 2021-22 season opens on October 14, Jones will receive the Orchestra’s Distinguished Service Award, “recognizing her extraordinary artistic achievements and dedicated service to music and to the Greater Cleveland community.” Three days later, she will play her final concert as principal keyboard as she retires from the Orchestra. She stands as the ensemble’s longest-serving principal player from any section.

To watch a special video about Jones and listen to a music playlist of her most memorable and significant performances, visit clevelandorchestra.com/joela.

“Joela always has the interest of the Orchestra at her heart, the center of her heart,” said Music Director Franz Welser-Möst. “It doesn’t matter if she is on stage or off stage, she really thrives on quality. The artistic quality is priority number one for her, period. And everything else doesn’t matter. The spirit Joela has carried for this orchestra for over 50 years is extraordinary. She is always one of the first musicians going to the library asking for what’s coming up, not in two weeks, but in two months or next year, next season. She never shies away from anything difficult or challenging. And she does it at the highest possible level.”

“Joela’s contributions and impact after more than a half-century of service are immense,” said Mark Williams, Chief Artistic and Operations Officer of The Cleveland Orchestra. “Her versatility, musicality, and artistry — not just on piano, but also on organ, celesta, synthesizer, and her beloved accordion — have been demonstrated time and time again as part of the ensemble and as a keyboard soloist. She enthusiastically devoted herself to playing hundreds of performances of prominent and challenging music from across the orchestral repertoire, as well as participating in countless education programs and ably performing many chamber music pieces with colleagues.”

“Joela’s commitment and service to our Orchestra and community has simply been exceptional, and I could not think of a more deserving recipient for this Distinguished Service Award, “ said André Gremillet, President & CEO of The Cleveland Orchestra. “Joela’s artistry and leadership as Principal Keyboard for over five decades as well as the great human qualities she displays in everything she does will forever be part of the glorious Cleveland Orchestra history.”

Official Citation for the Distinguished Service Award on October 14

Joela Jones first appeared as a concerto soloist with musicians of The Cleveland Orchestra for a Summer Pops concert in 1966. The world premiere of a new concerto with George Szell followed the next year, after which he asked her to join his world-renowned group as keyboardist. Her name first appeared on the ensemble’s printed roster with the opening season of Blossom Music Center in 1968, and in 1972 she was officially designated as the Orchestra’s Principal Keyboard player. She has held the Rudolf Serkin Endowed Chair since its creation in 1977.

This fall, after more than a half-century of service overall, Joela retires as The Cleveland Orchestra’s longest-serving principal player of any section. Her versatility, musicality, and artistry — not just on piano, but including organ, celesta, synthesizer, and her personal favorite, accordion — have been demonstrated in nearly 250 performances of more than 50 concertos or works featuring a solo keyboard role. In addition, she has played hundreds of additional performances of prominent (and challenging) keyboard parts from across the orchestral repertoire, as well as playing in countless education programs and ably performing many chamber music pieces with colleagues.

Born in Florida, Joela was encouraged to pursue many interests by her educator parents. She explored varied skills and a wide range of subjects, but piano was always at the forefront, with music in the center. She was declared a prodigy at age 10. Told to pursue her dreams, she did. Her mother moved with Joela to Rochester to study at Eastman School of Music while still in high school. Further studies brought her to Cleveland, where she found her musical home. Here, she also found love, creating her own family while at the same time becoming an indispensable member of Cleveland’s Orchestra family.

Across 54 years as a member, Joela has worked under five of The Cleveland Orchestra’s musical leaders, along with countless guest conductors and assistants. Her musicality has been tested and featured across music of different genres and eras — from Baroque to Modern, Mozart to MacDowell, Beethoven to Boulez, and Tchaikovsky to the music of today. Throughout, she has always exemplified the unique collaborative traits and mindset for which The Cleveland Orchestra is acclaimed around the world, blending a keen sense of artistry with an understanding of ensemble work and balance — to shine as an individual when her role requires, or to humbly blend together in service to each composer’s sound-world.

In recognition of her many contributions and talents, we are pleased to recognize her extraordinary artistic achievements and dedicated service to music, to The Cleveland Orchestra, and to the Greater Cleveland community by bestowing on Joela Jones our highest award for distinguished service.

Cleveland Orchestra Principal Keyboard Joela Jones (Rudolf Serkin Endowed Chair), is an artist of exceptional versatility, plays piano, organ, harpsichord, celesta, synthesizer, and accordion with The Cleveland Orchestra. As soloist with the Orchestra, she has performed over 50 different concertos in more than 300 performances at Severance Hall and Blossom Music Center as well as on tour in Europe and Asia. Recent appearances as piano soloist with music director Franz Welser-Möst conducting include Stravinsky’s Movements, Messiaen’s Sept Haï-Kaï, Trois Petites Liturgies de la Présence Divine, and Couleurs de la Cité Céleste, and Bernstein’s The Age of Anxiety. Since the renovation of Severance Hall’s Norton Memorial Organ in 2001, Jones has performed works for organ and orchestra by Barber, Poulenc, Saint-Saëns, Janáček, MacMillan, and Ives. She is also principal accompanist for the Cleveland Orchestra Chorus and visiting vocal soloists.

A native of Miami, Jones began her musical studies with her parents. She also studied at Florida State University with Edward Kilenyi and the renowned Hungarian pianist and composer Ernö (Ernst von) Dohnányi. At the age of 12, she was invited to appear as soloist with the Miami Symphony Orchestra. The next year, she received a scholarship to the Eastman School of Music, where she studied with José Echaniz. While at Eastman, she performed frequently with the Rochester Philharmonic and the Eastman Philharmonia, and later made her New York debut at Lewisohn Stadium, and also performed at the Metropolitan Opera. Jones earned a master of music degree from the Cleveland Institute of Music, where she studied with Victor Babin and Arthur Loesser. She studied organ with Warren Berryman at the Baldwin-Wallace College Conservatory of Music.

Jones has appeared as soloist with the orchestras of Boston, Chicago, Detroit, Houston, Philadelphia, and San Francisco, and has performed extensively in solo and chamber music recitals. She teaches advanced orchestral keyboard classes at the Cleveland Institute of Music, chairs collaborative piano at Kent Blossom Music, is coordinator of piano chamber music at Cleveland State University, and regularly serves as coach for the New World Symphony in Miami.

Jones has recorded works by Poulenc and d’Indy with the London Symphony Orchestra. With The Cleveland Orchestra, she has recorded Janáček’s Capriccio for Left Hand with Christoph von Dohnányi and Messiaen’s La Ville d’en Haut and Sept Haï-Kaï with Pierre Boulez. In recent years, Jones released an album of Claude Bolling’s Suite for Cello and Jazz Piano Trio with Cleveland Orchestra colleagues Richard Weiss, Maximilian Dimoff, and Donald Miller.

Joela Jones is married to Richard Weiss, first assistant principal cello of The Cleveland Orchestra. They are the parents of a son, Justin Jordan.

About the Distinguished Service Award