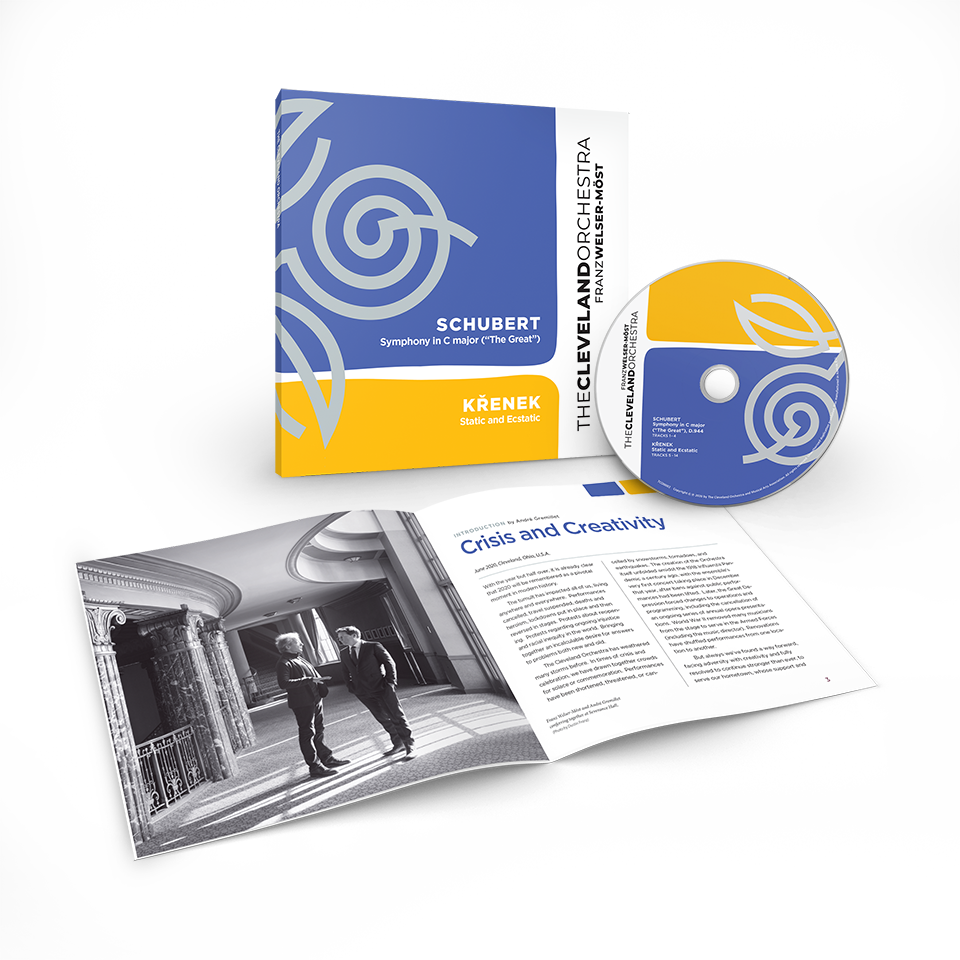 Schubert's "The Great" and Křenek

This new release features The Cleveland Orchestra’s final two performances from March 2020, just as the coronavirus shut down concerts around the world. Music Director Franz Welser-Möst pairs two contrasting works, from the 19th and 20th centuries. In high resolution audio, recorded live in the Jack, Joseph, and Morton Mandel Concert Hall at Severance.

The new disc features Schubert’s greatest symphonic masterpiece, his “Great” C-major Symphony (D.944) paired with a uniquely modern work by 20th-century composer Ernst Křenek, Static and Ecstatic. Both pieces were recorded live in Mandel Concert Hall at Severance with Music Director Franz Welser-Möst in March 2020, and mark The Cleveland Orchestra’s final performances prior to performing arts groups being shuttered around the world due to the coronavirus.

“This recording — pairing a symphony by Schubert with a modern piece by Ernst Křenek — came together quite unexpectedly, from two separate projects,” says Franz Welser-Möst, Music Director of The Cleveland Orchestra. “In the midst of changing circumstances, as the world itself was revolving in one direction and slowing down in so many other ways, these two pieces suddenly became an unlikely but obvious twosome.”

. . . Awareness of the novel coronavirus had reached us earlier, as The Cleveland Orchestra was making final preparations for the spring concert tour to Europe and the United Arab Emirates. Schedules many years in the making were suddenly being questioned. I talked daily with André Gremillet, the Orchestra’s President & CEO, to discuss the options and concerns. With the virus spreading, would it be safe for over a hundred musicians and accompanying staff to travel and perform? Which country might become a new hot spot.

Yet like so many everywhere, we kept to schedule, rehearsing and performing in Cleveland, while talking widely with medical experts in Ohio and from around the world. We were simultaneously reviewing our original plans and several alternate scenarios. Might we stay at home in Cleveland and present concerts for the larger community instead of going to Europe? Would the virus interrupt concerts scheduled for Cleveland in March, or later in the spring? The bigger picture was also on television each day. Rising numbers of people were becoming sick and dying. One country after another was reporting cases. People were frightened, hospitals were busier and busier. Towns, cities, and borders were closing.

After the Mendelssohn-Křenek weekend, rehearsals continued for Schubert and Prokofiev. But the situation was moving fast. On Thursday morning, March 12, André addressed the Orchestra just prior to the week’s final dress rehearsal, telling everyone that, in anticipation of Ohio’s governor banning the gathering of more than 100 people together, we were closing Severance Hall to the public. We would continue with plans to record the Thursday evening and Friday morning concerts, but Thursday night’s performance would be for an invited audience only, a few donors and staff members, to comply with new orders from the State of Ohio.

During rehearsals throughout the week, we had already been feeling each day that this week was somehow different. A number of the musicians were optimistic, others more worried and concerned. But we were all aware of everything happening across the world. And what we could agree on, what we knew with clearer certainty, was the music itself. And together we focused on what we were able to do, somehow almost unconsciously putting extra effort and understanding into our work together.

I remember at one point — and I know quite specifically when in the second movement — I suddenly realized that this might be the last time I would ever conduct The Cleveland Orchestra. The months ahead were filled with increasing uncertainty. We might not yet be ready to announce cancelling the rest of the season in April and May, but suddenly, perhaps without words, I understood the possibility of how deep this crisis might go. The tour, the weekend, the season, the summer. We could not know when we might make music together again, for a very long time.

In such times, you are in a situation you have never been before, yet also filled with awareness of reality. And the performances by The Cleveland Orchestra, both on Thursday and on Friday, the performances by this extraordinary group of musicians were perhaps as close to perfection as is possible to imagine. For all of us, in this kind of situation, you feel you want to hang on to something you love — to fully embrace the act of playing together, and to focus on Schubert’s beautifully laid-out music, filled as it is with clarity and conviction, in a musical journey of utmost majesty and tenderness. . . .

Listen as Franz Welser-Möst talks about those final performances in March 2020 and the recording of Schubert’s Symphony, on The Cleveland Orchestra’s “On A Personal Note” Podcast: Episode: The Sound of Crisis” from June 2020