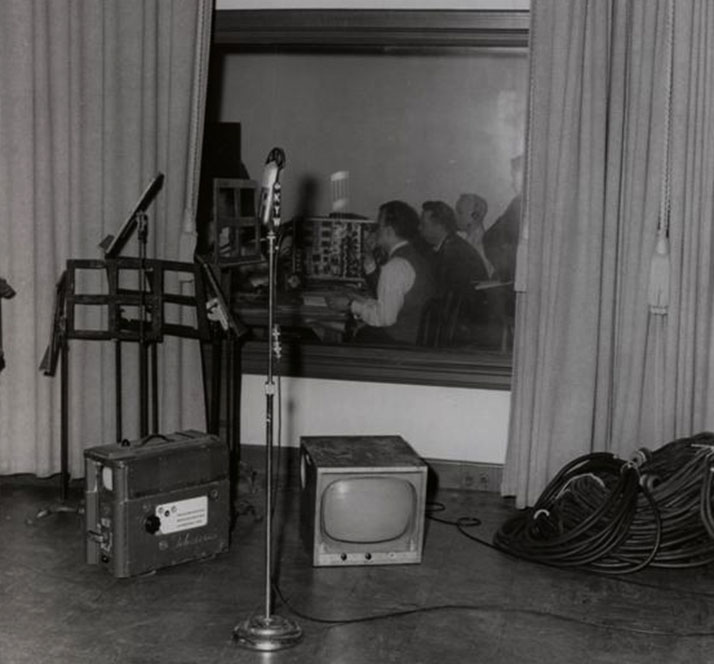 There is nothing quite like experiencing a live Cleveland Orchestra concert at Severance Hall. But for some, hearing the Orchestra in person is not a possibility, so listening to concerts over the airwaves is the next best thing. For nearly a hundred years, The Cleveland Orchestra’s radio broadcasts have educated children, inspired soldiers, and reached millions of listeners around the world.

The Cleveland Orchestra’s radio broadcast history dates back nearly to its founding in 1918. On November 10, 1922, the Orchestra began broadcasting weekly Thursday evening concerts over a local Cleveland radio station. Cleveland was a broadcast pioneer — it was only the second orchestra to air its concerts on the radio, having been preceded by the Detroit Symphony, which had begun their concert broadcasts earlier in 1922. The Cleveland broadcasts, sponsored by Union Trust, were heard each week by people as far away as Maine, Florida, Minnesota, and Canada. A few acetate discs and tapes have survived from this period, preserving a number of radio performances from the Orchestra’s very early years.Two years later, in 1924, the Orchestra traveled to New York to the Brunswick Recording Studios to make its first commercial recording, a disc of Tchaikovsky’s 1812 Overture.

The Cleveland Orchestra received many letters from dedicated radio listeners over these years, which inspired the ensemble to broadcast a full series of nine concerts from Masonic Hall over Cleveland station WTAM in 1926. The two hours of broadcast time was called the “Medusa” period, named after the main product of the Sandusky Cement Company, the series sponsor. Listeners at home could acquire program booklets for these concerts by picking them up at the station or writing to WTAM before the broadcasts. Each book is smaller than a postcard, and includes illustrations, program notes, and information about the Orchestra.

Broadcasting was also used for educational purposes during these early years: in 1925, the Orchestra experimented with broadcasting concerts specifically for children attending Cleveland Public Schools, and from 1926 to 1927, the Orchestra broadcast a full series of Children’s Concerts over the radio (sponsored by WTAM). The series was intended to be used for daytime music appreciation classes for children in the city and rural schools around Cleveland. Students could even buy a textbook, Listening in on the Masters, that accompanied the broadcasts, and the station offered a “Music Memory Contest” at the end of the course. This contest became so popular that by 1928, over 800 students and adults were participating in the yearly event.

When Severance Hall was built in 1929-31, it was designed with radio broadcasting in mind. Just before its opening, news articles in the local and national press claimed that Severance Hall was the only music hall in the world in which a radio studio had been built with the pre-determined purpose of broadcasting classical music of a symphony orchestra. The original radio control room and completely insulated broadcast studio accommodated 125 musicians, and served as the site for concerts broadcast from Severance Hall.  Eventually, live concerts were broadcast directly from the stage of the Hall. The broadcast booth is now located backstage, and is still used today.

The Cleveland Orchestra radio broadcasts soon rose to a national level: concerts were heard over the NBC network in the 1930s, and over the CBS network for the following two decades.These broadcasts had special significance during World War II: by the early 1940s, Cleveland Orchestra concerts reached over 100 radio stations in the United States alone, and through the use of shortwave radio, the Orchestra was also heard in Canada, Central and South America, and Europe. One of Severance Hall’s wartime press releases stated that four to six million listeners worldwide tuned-in to these concerts, and the same release claimed that Mrs. Winston Churchill was among the Orchestra’s enthusiastic admirers. The Orchestra received hundreds of telegrams, letters, and postcards during this time, many of which were from soldiers in the armed forces of the United States and Canada. A Lieutenant Colonel in the United States Field Artillery warmly wrote, “Many of us are enjoying your broadcasts. We hope that we may hear them wherever we may be.”

Luckily, many of the broadcasts from this period are preserved on reel-to-reel tapes. The clip below is from a wartime radio broadcast on October 17, 1943, under the direction of our 3rd music director, Erich Leinsdorf. That evening, pianist Arthur Loesser performed Brahms’s First Piano Concerto. Beginning with the beautiful theme of the second movement and followed by the very emotional ending of the piece. Loesser’s performance took place just hours before he left on a train to begin his wartime military service.

The Cleveland Orchestra’s radio broadcasts continued to increase in popularity after the war. WGAR’s “Fine Music” concert series began in 1957, broadcasting Cleveland Orchestra concerts locally and also making them available to more than 200 other CBS radio stations from coast to coast.

From 1965 to the present, the Orchestra’s broadcasts are syndicated around the world through Cleveland’s local classical music station, WCLV.  The station first started airing the Orchestra’s commercial recordings in 1963, and began live concert broadcasts in 1965. The Cleveland Orchestra Broadcast Service is available on a subscription basis to radio stations across the country.

By the late 1970s, over 100 radio stations in the United States and Canada carried weekly broadcasts of Cleveland Orchestra concerts taped in Severance Hall, at Blossom Music Center, and on tour. By 1990, this number grew to 400 stations, and the Broadcast Service provided 52 weeks of full-length taped concerts for international radio programming. This fall, we will celebrate our 50th anniversary of live concerts with WCLV from Severance Hall. The Orchestra can be heard twice each week as part of WCLV’s regular programming, and the station also posts recordings of concerts online that are available through on-demand audio streaming for up to two weeks. Today, millions of listeners have the opportunity to hear this great orchestra over the airwaves and share in The Cleveland Orchestra’s audio legacy.

Kate Rogers is an intern this season with The Cleveland Orchestra Archives.
She is a PhD student in musicology at Case Western Reserve University.

All photographs and audio clips courtesy of The Cleveland Orchestra Archives.