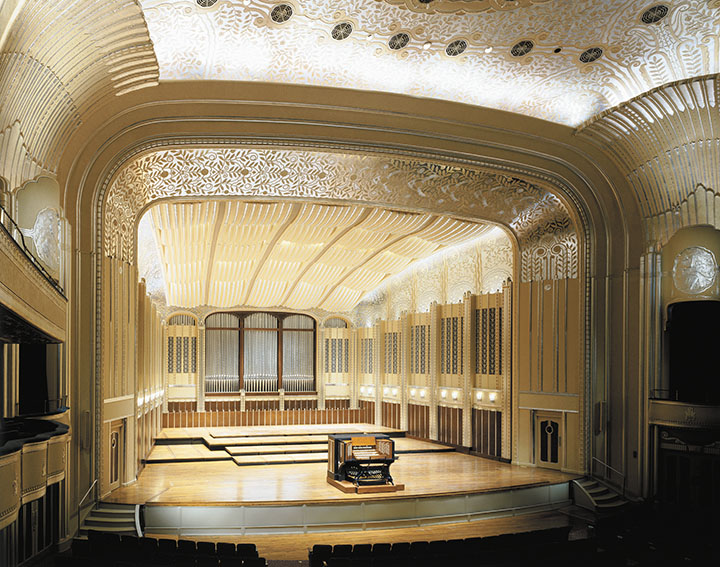 The Restoration of the Norton Memorial Organ

Many of us are familiar with the rich legacy of Severance Hall, built in 1931 as the home of The Cleveland Orchestra. But you might be surprised to find out that Severance Hall’s symphonic organ, known as the Norton Memorial Organ, has quite a history of its own as well. It was originally built in 1930 by the E.M. Skinner Organ Company of Boston, and stands as one of the largest Skinner organs in existence today. The enormous instrument weighs 50,000 pounds, and is comprised of 94 ranks of 6,025 pipes ranging in length from 32 feet to 7 inches.

The location of the organ in Severance Hall is hugely important for its sound. Its original installation, in a cramped space above the stage, made the organ difficult to hear.

In 1958, under the leadership of music director George Szell, a new acoustical shell was installed on the main stage in an effort to improve the acoustics of the concert hall.

This “Szell Shell” enhanced the hall’s acoustics, but it also created additional problems for the organ’s sound. The instrument was now barely audible to the audience, and regularly had to be amplified with speakers. Because of these unsatisfactory conditions, the organ was rarely used in concerts after 1976.

In an effort to reclaim the organ’s voice, an extensive restoration project was planned as part of the renovation of Severance Hall in 2000. At this time, the organ chambers were relocated to a newly-constructed space behind the stage. The new stage design also included a façade, allowing the organ’s sound to travel easily from directly behind the stage, without obstruction, into the concert hall.

The organ was restored by the Schantz Organ Company in Orrville, Ohio. All of the organ’s pipes and machinery had to be completely removed and reinstalled during this process. The more manageable pipes, like the one below, were removed by hand prior to the renovation. The largest organ pipes and wind chests, however, had to be removed from the original organ chamber using a crane!

The organ was housed at the Schantz Company from 1997-2000. During this time, the organ was carefully restored and pipes were built for the façade. The organ was installed in its new space in Severance Hall in 2000, and a gala re-dedication recital for the organ was held in January of 2001.

Today, the Norton Memorial Organ is regarded by many as one of the best concert hall organs in North America. Thanks to the Severance Hall renovation and restoration, this “king of instruments” has found its voice.